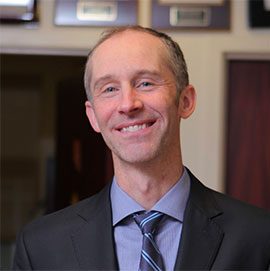 Dr. Vitale often works with a team of different surgeons for different types of cases.  Dr. Richard Anderson is one of those surgeons.  Dr. Anderson is one of the leading pediatric neurosurgeons in the Tri-State region. He specializes in the surgical treatment of pediatric brain and spinal tumors, complex spinal disorders (including tethered spinal cords, scoliosis, and instability), spasticity, Chiari I malformation, vascular disorders (including arteriovenous malformations and cavernous malformations), and general pediatric neurosurgery. Dr. Anderson extensively tests and utilizes the latest proven techniques in pediatric neurosurgery, including computer-guided surgical navigation, minimally invasive endoscopy, and microsurgery.
Dr. Anderson received his undergraduate degree in Molecular, Cellular, and Developmental Biology from the University of Colorado at Boulder, where he graduated Summa Cum Laude as the top student in his class. He then earned his medical degree from the Johns Hopkins University School of Medicine, graduating in the top 5% of the class. After completing his residency and chief residency in neurosurgery at The Neurological Institute of New York at Columbia University Medical Center/New York Presbyterian Hospital, Dr. Anderson spent a year at the University of Utah-Primary Children’s Medical Center receiving advanced fellowship training in pediatric neurosurgery.
Dr. Anderson’s laboratory and clinical research efforts focus on brain tumor immunology and biomechanics of the pediatric cervical spine. He has published over 150 neurosurgical papers and book chapters for the Journal of Neurosurgery-Pediatrics, Neurosurgery, Clinical Immunology, Journal of Immunology, PloSOne, BMC Cancer, and others. He participates actively in organized pediatric neurosurgery efforts and is currently on the executive committee of the AANS/CNS Section of Pediatric Neurosurgery.
Dr. Anderson has been interviewed and featured in US News and World Report, 201 Magazine, New York Magazine, Wikipedia, and The Bergen Record as well as on television networks including CBS, ABC and NY1. He has received over one hundred invitations to lecture and teach courses at domestic and international academic institutions and conferences. Donating time and expertise to those in need has sent him across the country and the world including Italy, Spain, Brazil, Turkey, Morocco, and China. Dr. Anderson is consistently named one of America’s Top Doctors, America’s Top Surgeons, Top Doctors in New Jersey, Top Doctors New York Metro area, Top Doctors in New York Magazine, and annually receives the Patient’s Choice Award.
For the convenience of his patient’s families, Dr. Anderson can be seen in Manhattan, Ridgewood, Paterson, Livingston, and Stamford. If you would like to make an appointment, please call 212.305.0219.
For more information please visit his website by following this link