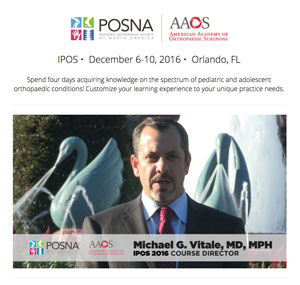 In December, 2016, Dr. Michael Vitale will serve as Course Director at the International Pediatric Orthopaedic Symposium (IPOS), Presented by POSNA and AAOS.

Many orthopedic surgeons around the world attend to learn more about pediatric orthopedics.

Pediatric orthopedic surgeons working currently are often astonished to learn that forty-five years ago only nine orthopedic surgeons in the USA and Canada could be identified as working almost exclusively with children. Not surprisingly, they felt isolated and felt a need to meet with other of similar interests. This was the wellspring of gatherings which began with the original Pediatric Orthopedic Society (POS) in 1971. Activity increased rapidly, but the flow, shortly became turbulent. New surgeons with a similar interest began to feel excluded, and rival groups sprung up. Finally in 1983 these coalesced with the establishment of a new Pediatric Orthopedic Society. Within a year this organization ran aground against tax regulations. Thus fear of the IRS became the force that added the “North America” to the POS (without the geographic courtesy of recognizing Mexico, nor the other areas of Central America). This is how the POSNA was born in 1984.