There is no other doctor that I would trust with my daughter. 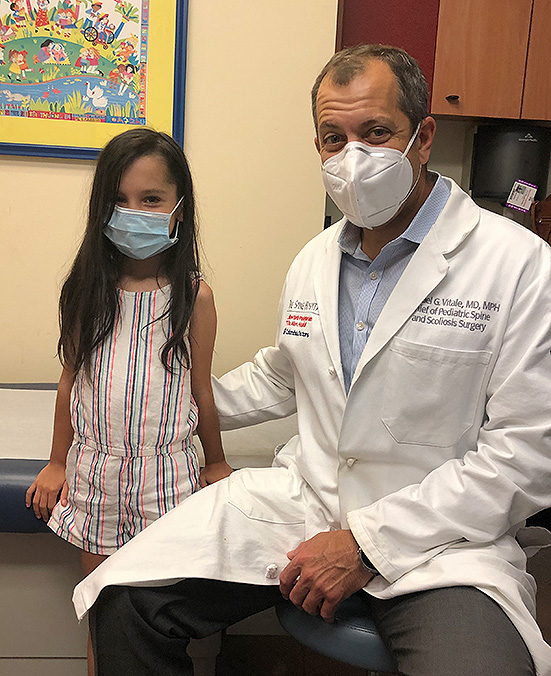 My daughter was diagnosed with Infantile Idiopathic Scoliosis when she was only seven months old. At that young of an age, there are so few treatment methods available. At the time Dr. Vitale was of the only doctors who specialized in this type of scoliosis and casting young children. From the moment I got the news that my baby had an issue with her spine I was a nervous wreck. However, within ten minutes of meeting Dr. Vitale, I was put at ease. He assured me that he was there to help and that everything would be okay.

In the six years since Dr. Vitale had become my daughter’s doctor, there has never been a moment that it hasn’t been abundantly clear that we had an amazing doctor on our side. Not only has he given her the best care but he also treated her not just as a patient but as the child she is. He is compassionate, caring, and kind. He understands that my daughter has some natural fear of doctors and medical procedures and always is patient with her and does everything he can to help alleviate some of those fears. On the multiple occasions that my insurance decided to prioritize money over my daughter’s health, Dr. Vitale had made sure that she still got everything she needed. My daughter and her medical needs are always what is important to him.

From twelve months to three years old my daughter underwent multiple procedures where she went under anesthesia to get a close to full body cast molded to her body to help fight against the ever-moving curve. At only three and a half years old she had her first spinal surgery. In the last year, she had three more surgeries. It never gets easier to watch your child go in for surgery. However, I never doubted for a moment that she was in the best possible hands. When we first met Dr. Vitale I was scared that my daughter would never walk normally. Now today I watch her run and play with her friends and just looking at her you would never know that she had any kind of medical problems. I know for a fact that none of this would be possible without Dr. Vitale. There is no other doctor that I would trust with my daughter.

< All Reviews
MAKE AN APPOINTMENT