Congenital scoliosis is a condition that affects newborns or young infants and is characterized by the presence of an abnormal curvature of the spine. Children with this condition actually begin to develop the curvature before birth, during the period of fetal growth in the womb. The curvature causes the spinal column to bend to the left or the right, in the shape of an S or a C. Abnormal development is considered the cause of the condition. It occurs when the bony spinal segments, or vertebrae, fail to form properly, seemingly creating ‘extra’ segments, or when normally separate vertebrae fuse together during fetal development.  The defects in the spine can be minor, involving only one segment of the vertebral column, or the condition can involve nearly every level and result in a more severe deformity. Congenital scoliosis has a relatively high rate of other, concurrent spinal deformities associated with it, such as kyphosis (an abnormal forward-bending curvature) and lordosis (an abnormal backward-bending curvature), which can also occur independently. Treatment ranges from observation to surgery, depending on the appearance of the spinal curvature. 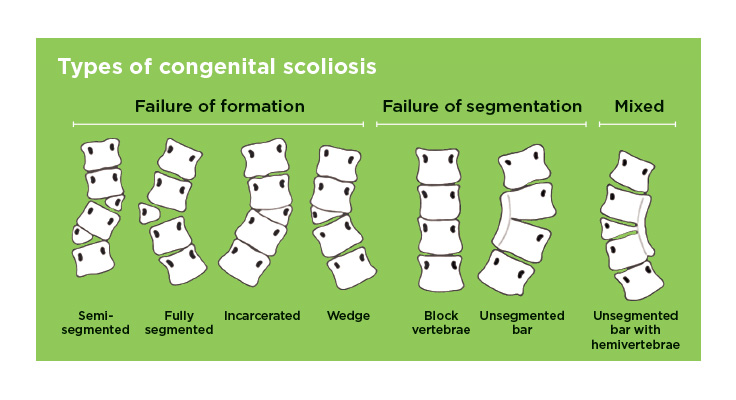 Some basic facts about congenital scoliosis

As mentioned above, there are two major causes of congenital scoliosis. The first is called failure of formation, in which portions of one or more vertebrae do not grow together to completion during fetal development, making the spine unstable in certain regions and creating the appearance of ‘extra’ spinal segments. The second major cause is referred to as an error of segmentation, in which bony regions of the vertebral column that normally grow into distinct segments actually fail to separate and end up fused together.  With either cause, the abnormalities often occur in multiple areas of the spine, and they often occur more on one side than another. This asymmetry is responsible for the development of the curvature in the womb, for as the muscles and ligaments develop around the spine and apply their natural forces to the vertebra, the two different sides have unequal stability and unequal responses to those forces.

Congenital scoliosis is usually first detected in the initial newborn physical examination by a pediatrician or noticed by a child’s parents soon after birth. Because of the increased incidence of other congenital abnormalities in the setting of scoliosis in the newborn, a very thorough examination must be performed on such children.  All patients suspected of having congenital scoliosis should receive an abdominal ultrasound to inspect the kidney and surrounding tissues and a cardiac echo. In addition, a neurologic exam of the back and extremities will be performed to ensure that no other spinal conditions are present.  A spine MRI is also done to inspect the spinal cord but that is typically done after one year of age. The physical will be followed by a series of x-rays, which allow for a more precise measurement of the presence and severity of a curvature. As mentioned before, this requires the presence of a curvature angle of at least 10 degrees, measured with the Cobb angle.

Decisions regarding the appropriate treatment for congenital scoliosis depend on the type and location of the spinal deformity and the likelihood that the curvature will worsen in the future. Some mild curves (10-25 degrees) may be treated only with observation. This entails simply that the child be seen regularly by an orthopaedic surgeon, who will monitor the possible progression of the curve with physical exams and x-rays over time. Visits must continue into adolescence, because growth spurts often trigger progression, even in a previously non-progressive curve. If progression does occur in this group, the patient may require bracing or surgical treatment.

Infants with moderate and severe curves have a greater chance of progressing, and often require casting and/or bracing treatment.

Scoliosis casting may be an option especially if the curve is flexible. Read more about our Scoliosis Casting Program.

Bracing treatment is less commonly used in congenital scoliosis than other types of scoliosis, mostly because the curves tend to be more rigid in newborns, and do not respond to the gentle forces of a brace. In some instances, however, bracing is appropriate and will be fitted individually for the patient, with a number of pads to maximize the child’s comfort in the device. Except for bathing, the brace is to be worn all the time, and the progression of the curve will be monitored closely by your orthopaedic surgeon. Occasionally, the curve is completely controlled by the brace, and after many years of bracing, no further treatment is needed. Learn more information about Scoliosis Bracing.

For curves that progress despite bracing treatment, surgery may be recommended.

In most instances of congenital scoliosis, a surgical operation is the most appropriate treatment. Operations may consist of removal of the ‘extra’ vertebrae or some type of spinal fusion, in which two or more of the vertebrae are fused together with bone bridges made of bone grafts.  Fusion operations may be followed by casting or bracing treatment, or may involve instrumentation, in which metal rods are attached to the spine to maintain curve correction. A device known as a “growing rod” may also be utilized, which is attached to the spine and periodically lengthened by a simple procedure, and will minimize any stunting of growth that could occur in certain cases.

Learn additional information about these techniques:

A major spine operation during a child’s neonatal or infant stage can be an emotional experience for many parents. Managing the demands of bracing or casting treatment for scoliosis has its drawbacks as well. However, the importance of such treatment steps at an appropriate, early age cannot be overemphasized for the future health of your child. Moreover, research has shown that the various treatments for congenital scoliosis are generally extremely successful. The vast majority of children grow up without major limitations to their activities and daily functioning, from simple outdoor games to competitive sports. Thus, despite some challenging hurdles very early in childhood, with treatment your child may be expected to live a normal, healthy, active life, and walk tall into adolescence and adulthood.