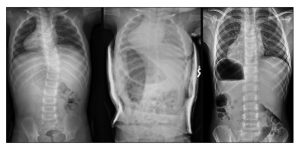 Infantile idiopathic scoliosis is a condition that affects children before the age of 3 and is characterized by the presence of an abnormal curve of the spine to the right or the left. This curvature causes the spinal column to bend to the left or the right, in the shape of an S or a C. The condition is seen more frequently in boys than girls.  Those with the infantile form will generally fall into two groups: those whose curvature disappears with growth and those whose curvature becomes progressive.  Most cases resolve spontaneously, but some may progress to more severe deformity. Treatment of infantile scoliosis may include observation, physical therapy, bracing, casting, and under rare circumstances, surgery.

Some basic facts about infantile scoliosis

The exact cause of infantile scoliosis is unknown. However, the considerable amount of medical research that has gone into understanding scoliosis has led to the development of two main hypotheses for how the condition may be caused. There is evidence to suggest that intrauterine molding may be responsible for the development of infantile scoliosis. With intrauterine molding, the spine is affected during fetal growth because of abnormal pressures exerted by the walls of the uterus on one side of the fetus’ body, or abnormal positioning of the fetus within the uterus. This hypothesis is supported by epidemiological data, which demonstrate that there are higher rates of plagiocephaly (a slight flattening of one side of the head) and developmental dysplasia of the hip (a condition that affects one of the hips) on the same side as the spinal curve in infants with idiopathic scoliosis. A second theory suggests that postnatal external pressures are exerted on the spine after birth, perhaps due to an infant being positioned on his/her back for extended periods of time in the crib.  A final hypothesis for a possible cause of infantile scoliosis is that of genetic inheritance. While the exact genes that may be involved have yet to be identified, research has shown that there is a higher incidence of the condition within some families, lending considerable weight to the probability of a genetic component.

Despite the notable amount evidence for these hypotheses, much about the condition remains to be discovered and fully understood. As a result, there is ongoing research at a number of academic medical centers throughout the U.S., attempting to further uncover the keys to the development of infantile scoliosis and improve the treatment and prevention of the condition.

Infantile scoliosis is usually first detected in the first 6 months of life during a standard physical examination by a pediatrician, or noticed by a child’s parents. When scoliosis is suspected, careful neurologic exam as well as exam of the head, back, and extremities should follow, to inspect for plagiocephaly, as described above, and to insure that the spinal cord is not being affected by another disease entity. A spinal MRI, a sophisticated radiological imaging technique, is essential to confirm the findings of the neurological exam and rule out other potential causes of scoliosis. A series of x-rays should also be taken, which allow for a more precise measurement of the severity of the curvature.

Decisions regarding the appropriate treatment for infantile scoliosis depend mostly on the severity of the spinal curvature and the likelihood that the curvature will worsen in the future. Because mild curves (10-25 degrees) very rarely progress to more severe curves and instead usually correct themselves, these children are treated only with observation. This entails that the child be seen regularly by an orthopaedic surgeon, who will monitor the possible progression of the curve with physical exams and x-rays. The scoliosis curve will be measured along with the rib vertebral angle difference (RVAD).  The higher both of these numbers, the more likely the curve is to progress and less likely that the curve will resolve on its own without intervention.

Infants with moderate and severe curves have a greater chance of progressing, and often require casting and/or bracing treatment.

Whether the curve resolves or continues to progress, visits must continue even into adolescence, because growth spurts may trigger progression, even in a previously non-progressive curve.

Please follow below links to read more about scoliosis casting and bracing.

Managing the demands of bracing or casting treatment for scoliosis can be a difficult task for infants and their parents alike. Surgery at such a young age, if necessary, can seem somewhat daunting as well. However, research has shown that the various treatments for infantile idiopathic scoliosis are generally extremely successful. The vast majority of children grow up without any limitations to their activities and daily functioning, from simple outdoor games to competitive sports. Thus, despite some challenging hurdles early in childhood, with treatment your child may be expected to live a normal, healthy, active life, and walk tall into adolescence and adulthood.