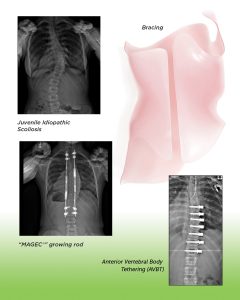 Juvenile Idiopathic Scoliosis affects children between 3–9 years of age. The exact cause of juvenile scoliosis (and for that matter adolescent idiopathic scoliosis) is unknown. It is a condition in which there is an abnormal curvature of the spine.

The curving of the spine causes the spinal column to bend to the left or  right, so that it takes the shape of an S or a C. Girls tend to have this condition more often than boys. The abnormal spinal curvatures in these patients can become more severe over time. Decisions regarding the appropriate treatment for juvenile scoliosis depend on the severity of the spinal curvature at the time of diagnosis, the age of the patient, and the likelihood that
the curvature will increase in the future.

Managing the demands of bracing treatment for scoliosis can be a challenging task for both children and their parents. And if surgery is necessary at such a young age, that can seem somewhat daunting as well. However, research has shown that the treatments for juvenile idiopathic scoliosis are generally extremely successful. The vast majority of children grow up without any limitations to their daily functioning and chosen activities from simple outdoor games to competitive sports. Thus, despite these challenging hurdles early in childhood, with treatment your child may be expected to live a normal, healthy, active life, and walk tall into adolescence and adulthood.

As previously mentioned, the exact cause of juvenile scoliosis is unknown. However, the considerable amount of medical research that has gone into understanding scoliosis has led to the acceptance of several hypotheses for how the condition may develop. Because the juvenile form has similar clinical features to the adolescent form, the two conditions actually have a number of the same proposed causes.

For example, there is evidence to suggest that deficits in understanding where their body is positioned in space, may be responsible for the development of juvenile scoliosis. Children may therefore not even realize when they are not positioning themselves exactly upright much of the time. As a result, the spine may progressively bend to one side to compensate for the deficit. In time, that bend maintains itself because the ligaments surrounding the vertebral joints may get stretched and then tighten according to whatever position is most often maintained. Because that position is one of lateral bending in some children, scoliosis ensues. As a result of the condition, the spine also rotates slightly on its axis, which causes the ribs on one side to rotate as well. The lateral bending can be difficult to assess on physical exam, because the spine is buried under several layers of muscle and skin, and cannot be viewed clearly without an x-ray. It is the rotational change of the spine that actually gets detected most frequently on physical exam.

Another possible cause of developing juvenile scoliosis may be genetic inheritance. Because a number of reports have emerged of the condition occurring in many members of a single family, many scientists believe that a set of genes that code for the deficits causing scoliosis may be inherited in a dominant fashion. However, because the incidence of scoliosis does not occur in a traditional dominant pattern (i.e., not every child of parents who had scoliosis develops the condition, and vice versa), most likely not everyone expresses these genes to the same extent. This suggests that the scoliosis gene, or genes, may be dominant, but there is extreme variability in genetic penetrance, which means that the degree to which the genes end up affecting an individual is quite unpredictable.  Research at several institutions has uncovered several different genes on different chromosomes that appear to be associated with scoliosis.  Many thoughtful orthopaedic surgeons believe we will discover that scoliosis is a more heterogeneous condition than it appears from the clinical description.

Despite the emergence of these and other hypotheses, much about the condition remains to be discovered and fully understood. As a result, there is ongoing research at a number of academic medical centers throughout the U.S., attempting to further uncover the keys to the development of juvenile scoliosis and improve its treatment and prevention.

How is juvenile scoliosis diagnosed?

Juvenile idiopathic scoliosis is usually first suspected during a standard physical examination by a pediatrician, noticed by a child’s parents or during a screening test at school. Such examinations have the child bend forward at the waist until the spine is parallel with the floor, while the physician observes the shape of the spine as it bends.  If scoliosis is present then when the child bends forward, the abnormal rotation of the spine will create a rib hump where the ribs on one side stick out slightly.  If a rib hump or sign of scoliosis is found then a standing x-ray series is recommended to make a definitive diagnosis of scoliosis. As mentioned before, this requires the presence of a curvature angle of at least 10 degrees.

If scoliosis is found then you will be referred onto a Pediatric Orthopaedic Surgeon to hear about the different treatment options that are available.

A neurologic exam of the back and extremities will be performed during the physical exam and sometimes with additional diagnostic testing to make sure that no other spinal conditions are present and that the spinal cord is not being affected by the presence of the abnormal curvature.

A spinal MRI, a sophisticated radiological imaging technique, is essential to confirm the findings of the neurological exam and rule out other potential causes of scoliosis. A series of x-rays should also be taken, which allow for a more precise measurement of the severity of the curvature.  As mentioned before, this requires the presence of a curvature angle of at least 10 degrees, measured with the Cobb angle.

How is JIS treated?

Decisions regarding the appropriate treatment for juvenile scoliosis depend on the severity of the spinal curvature at the time of diagnosis, the age of the patient, and the likelihood that the curvature will worsen in the future.

Mild curves (10-25 degrees) are initially treated only with observation. This entails simply that the child be seen again within 6-8 months by his/her orthopaedic surgeon, who will monitor the progression of the curve with follow-up physical exams and x-rays.

If a mild curve is observed to progress at a significant rate, or a child has a moderate to severe curve (>25 degrees) at the time of diagnosis, treatment is promptly begun, because of the high probability that the condition will worsen if untreated.  Treatment could consist of Scoliosis Casting, Scoliosis bracing and/or Schroth Therapy.  The type of treatment that is initiated depends on several factors including age and severity of the curve.

Some children depending on their age, curve size and other factors may be able to participate in a scoliosis specific type of physical therapy.  This therapy is called Schroth therapy.  This may be started prior to bracing or in conjunction with bracing. Read more about Schroth Physical Therapy.

Either after Scoliosis Casting or in the older Juvenile Scoliosis patient, bracing is initiated.  Occasionally with juvenile scoliosis, bracing may be discontinued for one or more years, with a return to observation, as described above. As the child begins an adolescent growth spurt, he/she may be re-braced to maintain the previously achieved correction of the curve. In other instances, curves worsen significantly after brace removal, which may necessitate reinstitution of full-time bracing treatment or possibly surgery. Read more about Scoliosis Bracing.

For curves that continue progressing during bracing treatment, surgery may be the appropriate treatment option.  For children who experience progression of scoliosis, early intervention is indicated to prevent chest wall deformity and to allow normal lung development.  The Pediatric Orthopaedic Surgeons at New York Presbyterian Morgan Stanley Children’s Hospital are dedicated to advancing treatment options for Early Onset Scoliosis through research and clinical innovation.

For some children in the 3-8 year-old age range, a device known as a “growing rod” may be utilized. In this type of treatment a metal rod attached to the spine is lengthened as the child grows. This correction without fusing the spine minimizes any stunting of growth that can occur with fusion. Several other types of surgical treatments are currently under investigation and have shown promising results, including those performed by our Pediatric Orthopaedic group here at Columbia.

Please follow the links below to learn more about the different types of procedures: