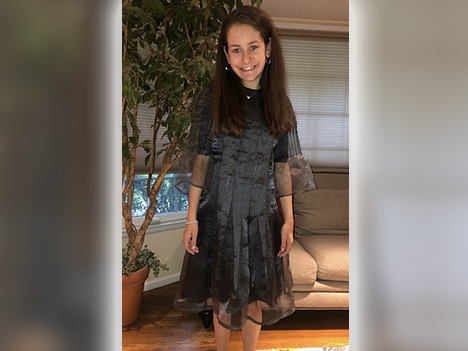 Zoe, a junior in high school has familial dysautonomia, which is a genetic disorder that affects the nervous system and tends to cause scoliosis. As Zoe’s spine started to curve more, her family came to a point where intervention needed to be done. “ The current orthopedist we were seeing kept pushing for surgery and wouldn’t back down, so we needed to get a second opinion and find someone else,” said mom, Tara.

The family was referred to Dr. Michael Vitale at Columbia University Irving Medical Center and NewYork-Presbyterian Hospital by their schroth therapist.”Dr. Vitale was so calm and gentle from the start, the opposite of our current orthopedic surgeon. He answered all our questions which was important for us,” said Tara.”

Zoe started to work with John from East Coast in the Columbia Orthopedics office to be put in braces for her spine. “John was amazing with Zoe and all the braces he made for her,” said mom.  This brace monitoring went on for a few years along with Schroth therapy, until the brace was becoming unbearable. Since surgery was more dangerous because of Zoe’s genetic condition, especially when it came to anesthesiology, Dr. Vitale took this into consideration and told the family that the best option would be to have the surgery immediately since he would not need to fuse Zoe’s spine all the way, which meant less time under anesthesia. 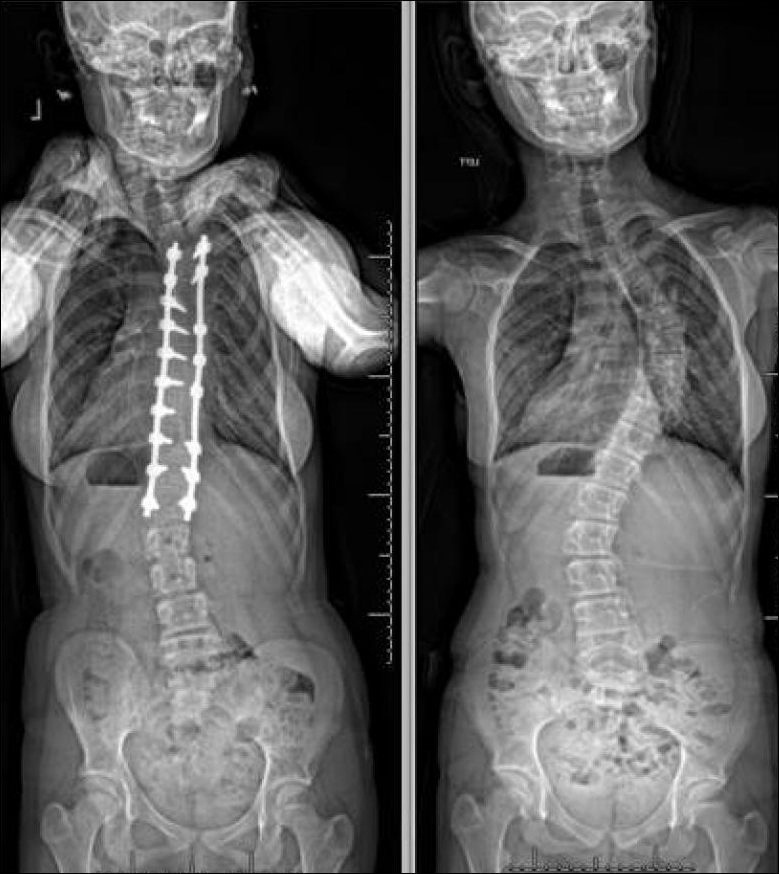 Zoe’s spine x-rays: after surgery (left) and before surgery (right)

“He let us go as long as we could without surgery and reassured us that it would be easier to fix the spine now before it got complicated and required longer surgery. We were able to get Zoe into surgery six weeks later. She had to go through a lot of clearances because of her conditions and we were afraid no one would listen to us and her needs, because it’s not textbook, but it was the opposite. Everyone we dealt with us was amazing and Dr. Vitale’s team especially was great in helping us schedule everything and feel comfortable,” said Tara.

“Dr. Vitale talked very gently to Zoe and reassured her of the next steps. His team also set up consultations with any other doctors we needed beforehand. The day of the surgery all went very smoothly, and Dr. Vitale came out and said that he had straightened her spine to the point where she was going to be safe and didn’t push her to much, since she is so medically fragile and that there were no concerns on how her recovery will affect her.”

We so appreciated Dr. Vitale’s words and confidence, we wanted to make sure we had a surgeon who wouldn’t push the limit and Dr. Vitale was that for us.

Post-surgery, so many things have been better for Zoe; her back in general looks better she had a big hump before and it’s not there anymore, she is walking more balanced, and breathing better. She also sees a pulmonologist regularly and has had “crackle sounds” in her lungs since she was in preschool, and at her last appointment there were no “crackles” in her lungs. Zoe has also grown taller, and her development has progressed.

“Zoe is really living life like a typical normal teenager. We felt a sigh of relief post-surgery, and Zoe has not let anything hold her back. You would never know she had surgery! We are tremendously grateful to Dr. Vitale and the team at Columbia, and how they have helped us over the years, at the time for a little girl to now as a high schooler,” said Tara.

Dr. Vitale made the right call about having surgery when we did and was really smart about it—the surgery was smaller and easier, and Zoe recovered really well. We know others now that waited to have surgery and have had complications, we are so thankful for his guidance, said Zoe’s Mom.