Neuromuscular scoliosis is a condition that affects children with neuromuscular disorders and is characterized by the presence of one or more abnormal curvatures of the spine. This curvature causes the spinal column to bend to the left or the right, in the shape of an S or a C. Because there is such a wide variety of the types of diseases that may cause neuromuscular scoliosis, the clinical presentation and severity of this condition is extremely variable. However, most children with this disease have poor balance and poor coordination of their trunk, neck, and head. There is also a high frequency of concurrent kyphosis, which is an abnormal forward-bending curve of the spine. The condition is generally classified into two categories, based on the type of disease that the child suffers from, and which causes the abnormal curve. Neuropathic scoliosis involves diseases that are primarily afflictions of the nervous system, such as cerebral palsy or spinal cord trauma, whereas myopathic scoliosis involves muscular disorders, like muscular dystrophy or arthrogryposis. Unlike the other types of scoliosis, treatment of neuromuscular scoliosis is very unpredictable, mostly because the abnormal curves of the spine are also unpredictable. 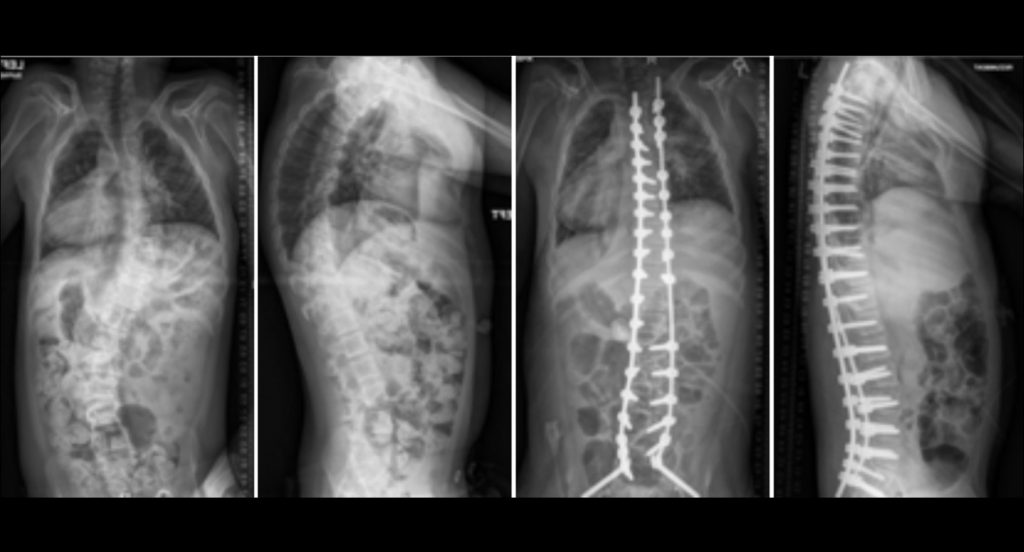 Some basic facts about neuromuscular scoliosis

Unlike idiopathic scoliosis, which is the most common type of scoliosis and does not have an established cause, neuromuscular scoliosis is generally quite well understood, with regard to causation. In all cases, the underlying neuromuscular condition is felt to be the trigger for the development of scoliosis.

In neuropathic scoliosis, defects or abnormalities in the central nervous system (i.e. the brain and spinal cord) leads to altered proprioception, or diminished control of the paraspinal muscles. As a result, abnormal forces will be transmitted upon the vertebral units of the spine, either because the muscles show increased motion (termed spasticity, as seen in cerebral palsy), decreased motion (also referred to as flaccidity, as occurs in Friederich’s ataxia), or motion that is out-of-sequence (called dyskinesia, also seen in cerebral palsy).

Myopathic scoliosis is caused in a similar fashion, but through the direct effects of various diseases upon the muscles themselves, despite normal nervous systems. In many of these conditions, the most common of which is muscular dystrophy, the muscles undergo atrophy, or gradual wasting of the muscle tissue. Because the muscles will atrophy at different rates, scoliosis can result when the paraspinal muscles or other muscles of the trunk waste more quickly or significantly on one side of the body than the other, if even in a very small section of the spine. This throws off the stability of the spinal column, and leads to the curvatures seen in scoliosis.  Other muscle diseases, such as arthropryposis, cause contractures of the muscles, which means they are excessively flexed, and remain fixed in a contracted position because of fibrosis of the muscles. This can occur in trunk and paraspinal muscles, obviously transmitting abnormal lateral forces on the normally symmetrical spine.

Because the neuromuscular changes in so many of these diseases arise in childhood, the spine is still in the process of growing when it experiences these abnormal forces, which generally worsens curves as growth spurts occur.

Neuromuscular scoliosis is usually first detected during a standard physical examination by a pediatrician, noticed by a child’s parents, or during a full workup for the child’s neuromuscular condition. The physical will be followed by a series of x-rays, which allow for a more precise measurement of the possible presence and severity of one or more curves. As previously mentioned, this requires at least 10 degrees of curvature to be diagnosed with scoliosis.

A full neurologic exam of the back and extremities will be performed to insure that no other spinal conditions are present and that the spinal cord is not being affected by the presence of the abnormal curvature, if it is not already affected by the underlying condition. Occasionally, a spinal MRI, another radiological imaging technique, will be done in addition to the spinal x-rays.

Decisions regarding the appropriate treatment for neuromuscular scoliosis depend on the severity of the spinal curvature at the time of the diagnosis, the age of the patient, and the symptoms of the existing neurological or muscular disorder. The curves in almost all of the predisposing diseases have a high rate of progression, and almost all children will therefore require surgery at some point. However, in some instances, bracing, though not a definitive form of treatment, will be utilized to slow the progression of the curve until a later time that surgery can be safely performed.

Bracing treatment usually involves wearing an external brace when the child is upright, but not when they are sleeping or lying flat. Though there are a number of braces available for treatment of scoliosis, the semi rigid molded TLSO brace (thoraco-lumbo-sacral orthosis) is the preferred design, because it is effective when worn periodically and does not significantly constrict breathing, as might occur with some of the other designs.  This is typically the brace used in patients who are in a wheelchair.  In ambulatory patients the more traditional TLSO may be used.  In general, the brace should improve a patient’s ability to sit or stand, as well as perform certain functions otherwise not possible. The brace should be worn for only several years, or until the decision has been made to pursue surgical treatment. Wheelchair seating adaptations also exist that can act similarly to bracing, and may be appropriate for some patients.

Surgeries for neuromuscular scoliosis are relatively complex, because of the other biological effects that are common in underlying neuromuscular diseases, such as respiratory difficulties, weak bones, and poor nutrition.  Operations generally consist of instrumentation, in which metal rods are attached to the spine to maintain curve correction and spinal fusion, in which two or more of the vertebrae are fused together with bone bridges made of bone grafts. Fusion between the spine and the pelvis may also be necessary with cases of pelvic obliquity and particularly in children with muscular dystrophy.  Because of the stability and effectiveness of the devices used in these spine operations today, patients usually do not require bracing treatment following surgery, and hospital stays are usually limited to 3-5 days.  The type of surgery depends on the severity of the curve and the age of the patient.  If the patient is younger a growing rod type of technique may be used.  If the patient is older, then a spinal fusion and instrumentation is most likely what will be recommended.

Please find more information below on each of these methods:

The development of scoliosis on top of an existing neuromuscular condition can be a difficult challenge for children and their parents alike. Surgery at a young age, if necessary, can seem somewhat daunting as well. However, because of the affects that scoliosis can have if left untreated, it is imperative that parents promptly seek out diagnosis and management of the condition by an orthopaedic surgeon. Surgical treatment of neuromuscular scoliosis is generally quite successful in reducing curves and improving the quality of patients’ lives. Our Pediatric Orthopaedic group here at the Children’s Hospital of New York is dedicated not only to the outcome of the treatment steps along the way, but also to the end goal of making your child’s present and future life as comfortable, happy, and fulfilling as possible.