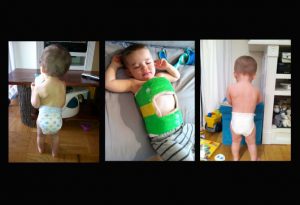 Click on this photo to see how Dr. Vitale used casting to achieve wonderful results for Ryan. Case update: Ryan is now 3 years old and his curve is still low at 7 degrees. He is not in a brace at this point and doing well. If his curve had continued to progress in a brace he may have needed further interventions such as growing rods or an eventual spinal fusion and instrumentation.

The very young child with scoliosis is often not a candidate for surgery and in fact may not need surgery. The Early Onset Scoliosis (EOS) Center at Children’s Hospital has state of the art non-invasive treatment techniques available for these children. The patient has a cast applied to the trunk on a specially designed table that allows us to control and correct the curves

Casting treatment consists of serial casting, which entails that the cast be changed about every 8 weeks. With each new cast application there is an attempt to gradually correct the curvature. The cast is made of fiberglass, and is applied in the operating room under general anesthesia, which means that the infant will be put to sleep through the application process. This enables the best cast to be applied while the infant is sleeping. Correction is usually achieved by around 18 months of age.

Casting treatment is followed up with bracing treatment, which is needed to maintain the correction. There are a number of braces available for treatment of infantile scoliosis and there is no consensus on which is the best.  Further, there is no scientific evidence that bracing in infants alters the natural history of this condition.  Except for bathing and exercise, the brace is to be worn all the time, usually for 2 to 3 years, after which time the child is weaned off the brace, provided correction of the curvature has been maintained. Occasionally, curves recur after brace removal, which necessitates reinstitution of full-time bracing treatment.  If the curve progresses during bracing treatment casting may be restarted or surgery may be warranted.

Our infantile idiopathic casting program utilizes both the Amil casting frame and Noel casting frame. We follow the techniques of Dr. Mehta to utilize growth as a corrective force in the treatment of progressive infantile scoliosis. Further information about casting, including tips for care of the young child in a spinal cast, is available at www.infantilescoliosis.org.